A classic piece of work by Stephen Joseph Bergman an American psychiatrist known by his pen name Samuel Shem has written this satirical piece of writing which is loved by all today. The original text that was first produced was criticized considerably for making a mockery out of the medical profession. But as the years passed by, “The House of God” became one of the prominent books which highlighted what doctors go through in their lifetime and the need of humanity and ethics much required in this field of profession.

The book starts by introducing a character named Dr Roy Basch around which the whole story revolves. Hospital is known by the name of “The House of God” is where Dr Roy is getting his training as an intern among others under the resident popularly known by the name of “The Fat Man”. The beauty of the book is that every character introduced is tagged with some kind of a funny name. Dr Fat Man as we may now call it; does not like to follow the rules and calls his patients as “goomers”. He has laws made on goomers which he teaches to his interns on every step of the way during their training under him and by the time the book reaches the end, Fat Man has given some 13 rules addressing the goomers in different satirical ways. 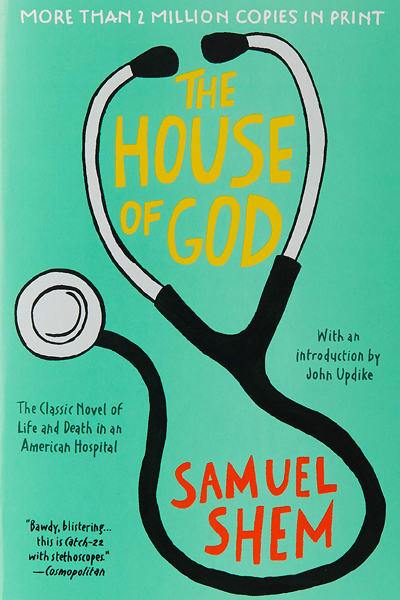 Dr Roy Basch follows the advice of the Fat Man ardently as he believes what The Fat Man says is right. In practicality too the Fat Man’s advice that medication and procedures are only there to harm the patients and not heal them for some odd reason worked every time. Basch is able to maintain a good reputation among the interns by following this advice of The Fat Man where his patients recovered without receiving any medical help. He only pretended to give them medications where in reality the patients were recovering on their own.

This story gains momentum when Basch’s resident changes and he is now under the supervision of Dr Jo who unlike the Fat Man follows every rule of the medical profession. Basch survives under him but still breaks the rules cleverly where nobody comes to know what he is doing and is still going by the advice of the Fat Man.

The story takes the abrupt turn when Basch mental health deteriorates when one of his friend Wayne Potts commits suicide. Potts believed that because he did not treat his patent with steroids that were needed for the patient to recover, caused the death of his patient. This made Potts feel guilty because of which he ended his life. Basch became troubled as the time passed and also started indulging in affairs with nurses and co-workers that gave him a bad name.

Through thick and thin, the love of his life Berry somehow remained loyal to him and in the end, they get married where Basch leaves medical internship and adopts psychiatry as his career after he gets influenced by Cohen, a psychiatry resident.

This book shows how emotionally troubled the doctors and interns can get in the field of medical sciences and how important it is for them to seek psychiatric help from time to time. This book highlighted that there is a need for a more humanitarian approach to treat patients lovingly and not treat them as just mere cases of hit and trial.

“The House of God” is Samuel Shem best book out of all the books he wrote and because he was from the medical profession himself his books had that whimsical approach that people loved reading them.